The creative arts play an important role in the life of the congregation. Our many talented members find outlets for their diverse artistic abilities in a variety of opportunities. 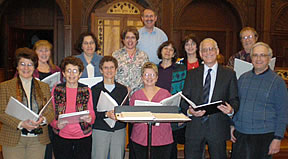 The all volunteer, congregant choir is a much admired constant at Or Hadash, providing pleasing and inviting Jewish choral music at Shabbat and Holiday services. The group also sings at the Delaware Valley Choral Festival, community events, and occasional B’nei Mitzvot. Learn more »

Klezmer is the musical tradition of Ashkenazic Jews for weddings and other simchas.  The tunes range from slow and mournful to fast and frenetic, and almost all are meant for dancing. Lyrics to songs are generally in Yiddish. The notes and rhythms of Klezmer music are both related to and different from classical modes and keys. The roots of Klezmer music are in Eastern Europe and nearby Middle Eastern regions.